Atarashii Naginata is largely based on the two biggest old classical naginata styles, namely Tendōryū and Jikishinkageryū, which are still the biggest styles in which naginata is used as the main weapon.

Initially, this new art was called as Gakko Naginata (school Naginata), because of its initial purpose to serve as a school physical education for girls, in which it was used from ~1910 until the beginning of the Second World War. 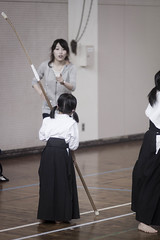 Later, the name was changed to Atarashii Naginata, literally "New Naginata", which became the standarsised version in a similar way as it was with the development of Kendō, Judō and Iaidō.

The current form of the martial art was reached in the 1970s with the finalisation of the Zen Nihon Kata.

The concept of Naginata is to foster a competent mind through the training of Naginata.

Originally the weapon naginata was heavier due to the long shaft and the steel blade, thus the techniques are designed in such a way. Minimal power is needed while the weapon moves together with the body and is used in circular swings. Below is the list of the strikes and thrusts used in Naginata.

Training is structured in moving between different stances and in using them efficiently as possible, with the above mentioned strikes. Below is a list of the official positions, which are required to know for example when filling in the paper exam for gradings.

Different steps enable swift movements within different techniques such as the strikes listed above. With the given set of different feet movements, it is possible to have certain rules and characteristics for techniques, but also to guide practitioners.

In general, the training session begins with the training of Happōburi, in which the different cutting angles are studies. The purpose of these exercises is to learn to use the weapon along with the body in the given circular movement, with the minimal effort required. The exercise includes the following five cutting techniques.

In the paired drills of Naginata, both practitioners are using the bamboo bladed naginata.

The first paired drill is made of six parts of which each contains a certain strike and a certain receiving technique. The purpose of this drill is to teach correct striking and receiving distances, timing and also how to combine these different techniques in to one complete combination.

Paired training continues with a series of predefined fights. These eight individual drills are called Shikake Oji. Each of them consists of two to three attacks and defences. The initiating side is called Shikake and the receiving side, which also wins in the end is called Oji.

The kata series is made of seven individual drills in which both practitioners are holding a special kata naginata, which is completely made of hard wood. It is very similar to the naginata used in Tendōryu Naginatajutsu, with the exception of the tsuba size.

This series is usually taught only after the practitioner have reached the level of nidan (second level), most likely due to its demanding technical requirements and tactical content. Also it is required in the grading for sandan (third level) and higher.

The more advanced practitioners acts as a "hikitate" who is opening targets for the other practitioner in which correct attacks should be done in a fast tempo. 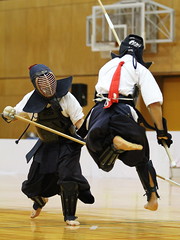 Free form match in which both are trying to hit the defined targets with correct attacks.

When the practitioners of Kendō and Naginata encounter in a match, this match is called Ishu Jiai.

There are no official rules for this kind of matches, since they are representing two different martial arts, but however it is often demonstrated in an events such as Kyoto Taikai and Naginata World Championships. 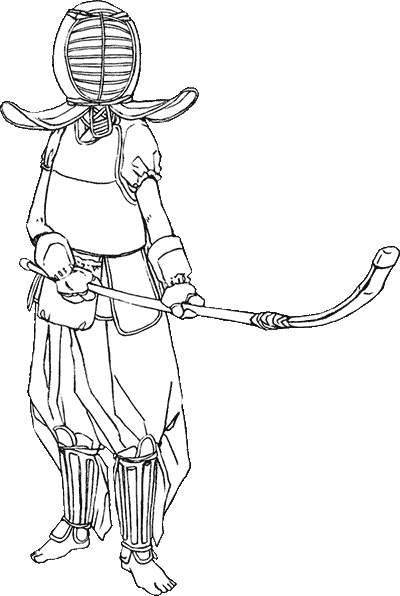 In order to practise safely in full contact matches and target practise, the protecting armour (bōgu) was developed. It is made of the following parts:

The requirements are available here .