Currently there are no upcoming events in Finland related to Atarashii Naginata.

List of events in Finland, in which Finnish members have joined, or are somehow related to Naginata in Finland. 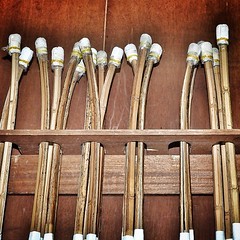 While the weapon currently used in the training is made of a wooden handle and the blade is made of bamboo, it is most likely true that a real naginata can be also seen in a museum or perhaps in a collectors collection.

In the regular trainings, two practitioners both equipped with naginata exchange techniques such as attack, defence and counter attack. All happens within a predefined rules and risk for injury is very low, even while practising in protective gear on a full contact sparring.

These pages are about Atarashii Naginata (Naginata in short) and Jikishinkageryū Naginatajutsu (referred to as Koryu) training. Both can be practised on a regular basis in Helsinki and small-scale seminars around Finland.

Historically, the weapon naginata has been used by men the field of battle, but also among women in order to defence their homes, primarily cavalry sword and uses the opponent.

While the Meiji era arrived to Japan, naginata as a weapon started to attract different audience when it was used as a high school sport education for young women. It is the main reason why Naginata is much more popular among women than men.

Sports enthusiasts in Japan for more than 90% are women, but outside of Japan enthusiast base consists of a balance of men and women .

Naginata training suit consists of a white jacket and short sleeves black or dark blue hakama. A white belt may be used under the hakama in order to have the outfit to sit more firmly in place.

The outfit (jacket and hakama) cost usually about 90 € and practising weapon (shiai naginata yo) for about 80 €. Later, to obtain protection; of which consisting of sets is called bogu . This includes a helmet (men), chest armour (do), gloves (kote), waist protector (tare) and shin guards (sune-ate). The common price starts from 600 €, but they do not need to purchase all the same time, since their training progresses step by step, by adding one protector at the time, starting with the sune-ate.