Jikishinkageryū Naginatajutsu is one of the biggest styles that are still being practised,in which the naginata is the main weapon. The style was founded in Japan about 500 years ago, in the Kanto area, in a place called Kashima. From the same place many sword fighting schools have been initiated. 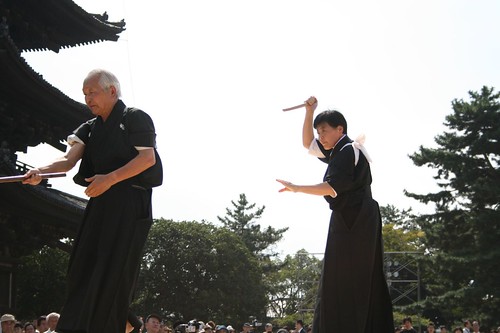 At the moment the style is being practised along with Japan, at Hawaii (USA), Belgium and Finland. All practitioners are members of the Japanese main organisation called Shūtokukai (秀徳会), which has the purpose of preserving and respecting the legacy of Jikishinkageryū Naginatajutsu.

Style specific characteristics are the circular cutting techniques named after the wind- and watermills, in which the naginata can be in motion all the time.

In addition to naginata, the style also studies the use of tanto (short knife), bokken (wooden sword) and kusarigama (chain attached to a sickle).

Jikishinkageryū belongs to the Japanese organisation for classical styles, Nihon Kobudō Kyōkai, which is a society recognised by the Japanese government for authenticating the historical martial art styles.

By the end of the Meiji period in Japan, there were some ten styles left from the vast 400 from Edo period. The two biggest styles were Tendōryū ja Jikishinkageryū, both of which the main weapon is naginata. The head teachers of these two styles initiated the work for what we now know as Atarashii Naginata.

The training outfits are somewhat identical with the one exception being the tightening band in the sleeves, which is not present in the Jikishinkageryū version. During the demonstrations, usually a black jacket is worn and its sleeves are tied so they would not interfere with the action. 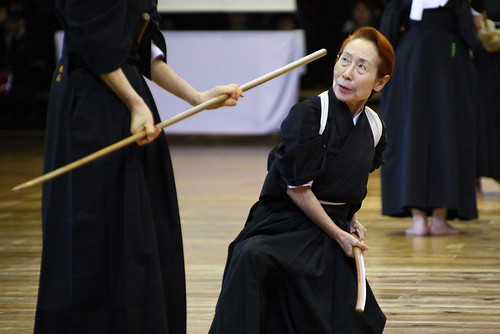 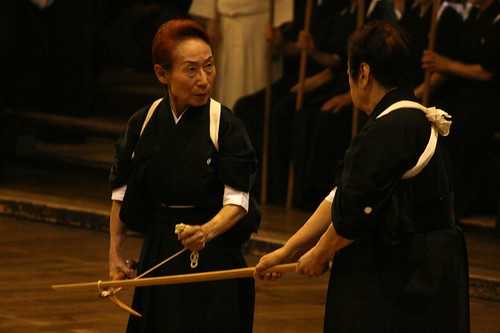 The chief instructor of the style is selected with a certain high technical requirements, deep knowledge, but also good social skills are very important.

Below is a list of the founder and few recent chief instructors from the last century.